Let’s start with a song. Frank Sinatra take it away please:

“I’ve been a puppet, a pauper, a pirate, a poet

A pawn and a king

I’ve been up and down and over and out

And I know one thing”

I could not sum up my experience of job hunting more accurately if I tried.

Worked in a call centre,

Listening to their qualms,

It doesn’t quite resonate in the same way, does it?

Throughout the pandemic, I was determined to find work, despite the financial shortcomings of businesses in every UK sector. Needless to say, being unemployed is already a huge knock on your confidence, and when combined with the hours spent filling out online applications, it can appear demotivating to say the least.

As I write this, things are certainly looking up.

Now that the job market is opening up again, it’s time to share everything I wish I had known when I began my year-long search.

The Problem with Graduate Schemes

Graduate schemes – what a wonderful invention. When I witnessed the extensive marketing strategies targeting young, budding graduates, I thought so too.

I applied to Frontline, Charity Works, Teach First, IPSOS Mori, The Civil Service – to name a few – with varying levels of success. Nevertheless, I felt eager to start a rigorous, tailored programme. But when I started to get my foot in the door regarding the recruitment process, I realised just how long it was – most often a six month to a year wait before you start your first day.

Are they all this long? I wondered.

After initial interviews, application forms, role plays, more interviews, and psychometric tests, my enthusiasm – along with my will to live – dwindled.

Finally, I reached the ultimate stages of Frontline’s tests but was rejected a week later. Honestly, graduate schemes had severely tested my patience and I resigned from applying altogether.

After saying a firm “no” to graduate schemes. I began my search for standard full-time jobs, as a streamlined route into my desired company. I was confident that my degree and graduation from a “top ten university” was a sure-fire foundation for career success.

Below is a real LinkedIn example I found in my search today of the key competencies required for an entry-level position as a researcher. 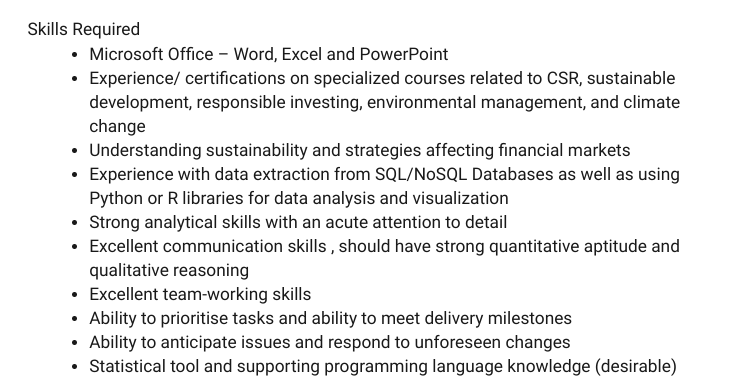 I have experience in researching climate change, human migration behaviour, and identity, but somewhere along the way, I forgot to apply myself to learning Python.

Frankly, I had undergone research for the past three years, even maintained my use of foreign languages but now I had to learn programming languages too!

With no luck securing a “proper” job, I resigned myself to the idea that yes, I was in need of some relevant, holistic, industry experience. Despite my extensive writing experience, I would have to secure an unpaid position at a reputable company.

It is true that within the writing industry, evidence of your craft is the writing itself, rather than your claims of being the next Steven King.

Recently, I’ve received great interest from companies offering unpaid internship positions, the idea being that graduates eager to prove themselves produce high-quality content in exchange for training and a platform to showcase their work. In my head, this is an excellent proposition, but there’s still one problem – how am I going to pay for my coffee?

Not only was I shocked at the concept, but I found that it was the norm. In fact, the world’s most recognised inter-governmental organization, The United Nations, explicitly promotes a model of unpaid internships, just for the privilege of working under their name.

Although, that still doesn’t solve the issue of how I would pay for my coffee – or any of the necessities that support a basic level of human existence.

Why is unpaid student labour the norm when students have completed at least three years of high-quality tuition and proven their drive throughout the duration of their degree?

Is it because we still believe that students live on baked beans, coffee, and other substances, that their labour is under-valued and unrecognised?

Granted, you may yourself in the sea of internships, temporary jobs and freelance work very soon, but don’t lose yourself there.

Take a moment to be proud of your achievement: you have a degree, you earned a degree.

When applying for positions, it’s almost impossible to measure progress, so make sure that you allow yourself to succeed in other areas of your life.

The idea of getting ahead of the game, or falling behind others is an illusion. Opportunities will arise and you will apply yourself to them, with the resources you have available to you at the time.

2 responses to “The Great Underpaid – Essential Advice for 2021 Graduates”